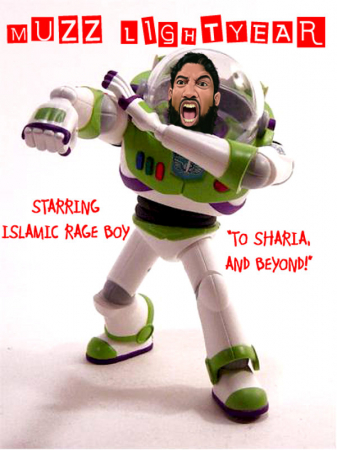 It gets a little bit safer in the short-term but not a great deal better in the mid- to long-term if one strips the nuance from Bolden’s assertions about President Obama wanting NASA to focus on becoming a Muslim Outreach program and takes it completely at face value. There is little immediate incremental risk in finding, “a way to reach out to the Muslim world and engage much more with dominantly Muslim nations to help them feel good about their historic contribution to science … and math and engineering.”

That is, on the other hand, a disturbingly fatuous goal. Taken at purely face value, Bolden’s statement of President Obama’s intent is filled with an implicit condescension that will likely enrage these already violence-prone Muslims and shows childish lack of concern over- and respect for the damage and deaths that they can engender.

Charles Krauthammer sums up this dangerously farcical idea far better and more concisely than I can:

This is a new of fatuousness. NASA was established to get America into space and to keep us there. This idea of ‘feel good about your past’ scientific achievements is the worst kind of group therapy, psycho-babble, imperial condescension and adolescent diplomacy.

No matter how one takes Bolden’s statements there’s little good that can come from the ideas that they present.

This entry was posted on Tuesday, July 6th, 2010 at 3:46 pm and is filed under Politics, Technology. You can leave a response, or trackback from your own site.

2 Responses to “To Shari’a And Beyond?”