A Threat To Muslims

A Webster, TX man, Duy Tran has a problem. The apartment manager at the Lodge on El Dorado where he just moved has told him his balcony display was a threat to the Muslim community and that he must remove it. 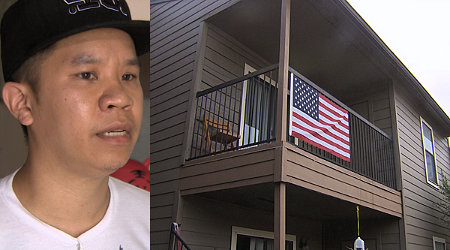 A Threat To The Muslim Community

Really? The American flag is a threat to some Muslim community living withing the borders of America? I guess even Texas has been infected by Liberal dhimmis.

This entry was posted on Friday, June 20th, 2014 at 6:32 am and is filed under Politics, Society. You can skip to the end and leave a response. Pinging is currently not allowed.

5 Responses to “A Threat To Muslims”