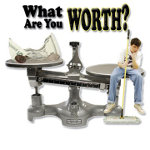 There are those, including Obama, who continually clamor for the Minimum Wage to be significantly increased. Indeed, calls for such an increase are currently part of Obama’s repertoire of his ever-ongoing campaign speeches. In truth, a majority of the masses – including 60% of the GOP, who should know better – want the federally mandated minimum wage to be increased significantly.

Self-interest, sympathy, and a national pathology of equating work with worth have conspired to make people believe that increasing the minimum wage is a good and proper thing. The Biblical admonition (1 Timothy 5:18) that worker is worth his wage still resonates strongly in American society.

The greatest and most societally damaging piece of this is the thought that the worker is worth anything at all in this context. The worker isn’t worth anything; nor is the worth of that worker properly measured by his or her wage. The work, and only the work, has worth that can be measured by a wage or price. Hence, it is the work that the worker performs that is worth the wage that he or receives for it.

This is the problem with attempting to raise the Minimum Wage. Doing so ignores the simple economic fact that the work often isn’t worth more than what that wage is now and, in some cases, isn’t really worth even that. These jobs are already paying the Maximum Wage that can be afforded for the work being done.

Most minimum wage jobs are either in industries with low profit margins or in fields where the work being performed by the menial, low-wage workers is, or was, of the nature of a customer perk or bonus. Most of the latter were service-oriented and have already been reduced or deprecated in favor of customer self-service options, e.g., trollies replacing skycaps and disposable flatware and such replacing dishwashers. Raising the labor costs in the low profit margin industries such as the fast food industry will, one way or another, put people relying upon these jobs out of work.

It will also effectively cull many younger and minority workers from those jobs because they’re less productive than other workers. As profit margins drop lower the employers will be forced to apply higher standards for such employment, standards that haven’t been necessary to-date.

These are just some of the negative impacts of trying to force employers to pay more than the maximum effective wage for a job.

This entry was posted on Friday, August 23rd, 2013 at 7:41 am and is filed under Politics. You can leave a response, or trackback from your own site.

One Response to “The Maximum Wage”