Normally, I would be one of that last people to either rant or wax sarcastic over a politician’s incessant lying. Mendacity is part and parcel of being a politician; no successful, i.e., elected and employed, politician can normally be other than a liar.

Obama is, however, a special case. 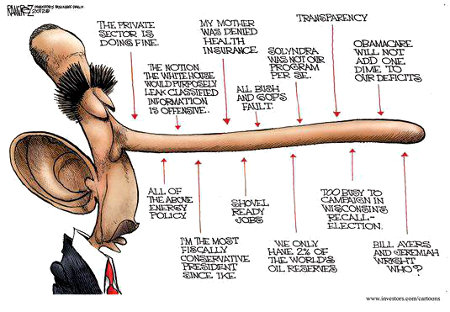 Obamnoccio’s Nose Is Getting Long

Obama has a propensity for lying that goes far beyond what most politicians have. He stands out from the crowd in the frequency, the scale, and the foolishness of his lies.

Where it not that the boy’s constituency either want desperately to believe his lies or don’t believe them but endorse his ends, he’d not being a figure of note today.

This entry was posted on Friday, April 5th, 2013 at 4:45 pm and is filed under Humor, Politics. You can leave a response, or trackback from your own site.