Line up, Sheeple, and get your fix of comforting lies. You can tell where to go by the long queue of eager believers already formed.

Don’t be shy. All those lies are guaranteed to be comforting and to absolve you of any feelings that you might have to take action about something or that you might be wrong along with those that you followed or believed in. 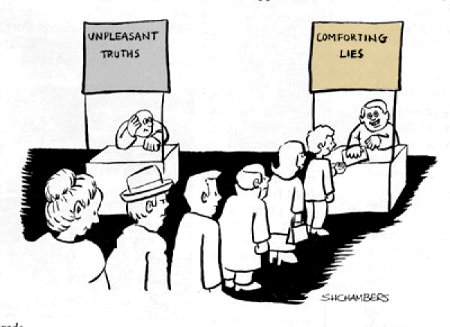 Line Up For Those Comforting Lies, Sheeple!

Oh sure, you could take the road far, far, less travelled and line up for truth instead.  But those truths are unpleasant and they’re bound to make you uncomfortable with yourself and the world around you.

Truth won’t set you free. It will bind you to action more stringently than any mortal tyrant and we can’t have that, can we? It’d be bound to make you uncomfortable and it would certainly upset the political and social order if you sheeple ever accepted those uncomfortable truths.

So line up, sheeple and get your comforting lies. Pay no attention to the man with the shears or the one with the hammer.

This entry was posted on Tuesday, March 20th, 2012 at 6:50 am and is filed under Politics, Society. You can skip to the end and leave a response. Pinging is currently not allowed.