Fishing has been a mainstay of Man since paleolithic times and has always played a major part in American life, society, and culture. As such, it makes a great analogy for most of our endeavors.

That’s why I’ve posted before about teaching people to fish and the differences between private sector and government fishing. 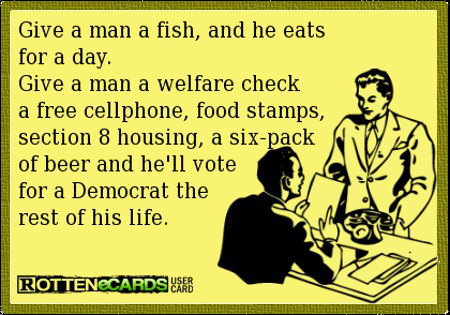 Fishing For Eaters And Takers

One thing about fishing, though is that you’ve got to use the right bait or you’re going home with an empty stringer or creel.

This is one thing you’v got to hand to the Democrats – they’ve known the right sorts of baits to use when fishing for Eaters, Takers, and all sorts of society’s bottom feeders. They’ve consistently reached their catch limits for generations.

This entry was posted on Saturday, November 10th, 2012 at 6:23 pm and is filed under 2012 Election, Humor, Politics, Society. You can leave a response, or trackback from your own site.