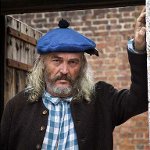 Every people have their stereotypes – beliefs about them based upon their nature, behaviors, predilections, and cultural norms. While often exagerated and always over-generalized, these stereotypes are almost always based upon a kernel of truth.

The Scots, for example, are known for frugality and miserliness and for a tendency to act the grifter when dealing with non-Scots.

There was a Scottish house painter named Smokey Macgregor who was very interested in making a penny where he could, so he often thinned down his paint to make it go a wee bit further.

As it happened, he got away with this for some time, but eventually the Baptist Church decided to do a big restoration job on the outside of one of their biggest buildings.

Smokey put in a bid, and, because his price was so low, he got the job. So he set about erecting the scaffolding and setting up the planks, and buying the paint and, yes, I am sorry to say, thinning it down with water.

Well, Smokey was up on the scaffolding, painting away, the job nearly completed, when suddenly there was a horrendous clap of thunder, the sky opened, and the rain poured down washing the thinned paint from all over the church and knocking Smokey clear off the scaffold to land on the lawn among the gravestones, surrounded by telltale puddles of the thinned and useless paint.

Smokey was no fool. He knew this was a judgment from the Almighty, so he got down on his knees and cried: “Oh, God, Oh God, forgive me; what should I do?”

And from the thunder, a mighty voice spoke…

“Repaint! Repaint! And thin no more!

Hehe…The Scots may well be hard-headed and stubborn but a bolt from the blue is something that they’d listen to so I’m sure old Smokey lived a good life from that point on. 😆

This entry was posted on Thursday, June 7th, 2012 at 5:30 am and is filed under Humor, Religion. You can skip to the end and leave a response. Pinging is currently not allowed.