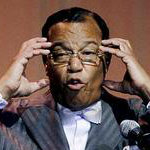 Personally, I’m with Farrakhan on this one.Â  Both the “Black Community” and America would be well-served by those creatures who think like Farrakhan un-assing our country which they hate so well. Then Americans of any and all genetic heritages but one singular culture could get down to the work of rebuilding our nation and moving forward together.

This entry was posted on Tuesday, July 30th, 2013 at 4:40 am and is filed under Politics, Society. You can skip to the end and leave a response. Pinging is currently not allowed.

The racist hate group, the Nation of Islam’s (NOI) leader, “Minister” Louis Farrakhan jabbered at an audience in Memphis, TN,  telling them that he believes the H1N1 flu vaccine was developed by Whites to kill millions of people throughout the world – but particularly Blacks in America’s inner cities.

It was a recurring theme in his over-an-hour-long jabbering and hollering screed against America, Whites, and especially Jews.

From the Memphis Daily News:

The H1N1 vaccines – they’re telling you there’s a pandemic but they don’t have enough to get an influenza vaccination and many wise people won’t take it,” he said. “You see, years ago (former Secretary of State) Henry Kissinger talked about the work of the new century was culling billions of people from our planet. In the Talmud, the people are called goyem who are useless eaters. They eat but they are useless. … Culling is another word for getting rid of billions of people because they say things are shrinking in terms of what people need, there are too many people for too few resources.

Normally this sort of repetitive, drooling mouthings spewing from the maw of a subhuman vermin like Farrakhan wouldn’t be worth mentioning. This time, however, it sparked my interest in an odd way and hence, this post was created.

What if society operates in a fashion similar in some manners to an organism? If so, Farrakhan could unknowingly be functioning as one of American society’s antibodies and helping our nation kill off disease within “the body” of our nation.

If the cultists – all avowed enemies of human society – who follow Farrakhan and believe what he spews up choose not to get vaccinated against various diseases such as the H1N1 influenza virus, then it’s possible that they will sicken and die off, freeing America from their cancerous growth.

H1N1 is actually a weak strain of influenza and far less lethal than many of the other strains circulating through the world, so we will sadly reap little or no immediate benefit from Farrakhan rants.

So perhaps Farrakhan does serve a useful purpose after all – as a societal antibody that helps kill off one of the “diseases” plaguing our land. Even if the current strain of H1N1 doesn’t live up to the hype surrounding it, something will come along that will and Farrakhan’s cultists may well die from it and thereby purge America of their sickness.

I don’t think Farrakhan would appreciate the comparison to a White blood cell at all though. 😉

This entry was posted on Thursday, October 22nd, 2009 at 11:53 am and is filed under Politics, Society. You can skip to the end and leave a response. Pinging is currently not allowed.