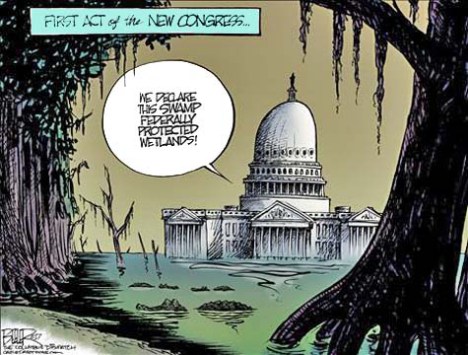 One of the key points or, at least, taglines of President-Elect Trump’s campaign was draining the swamp that is our nation’s bloated, often corrupted, and self-serving at the People’s expense federal government. So what was the first order of business after leadership elections and other logistic and procedural matters for the incoming 115th Congress? It was to attempt to bring the currently semi-independent Office of Congressional Ethics under the direct oversight and control of the House of Representative!

How very EPA-like of them. Nothing quite like attempting to have your swamp declared a federally protected wetland. 😆

Of course, they quickly reversed course – possibly actually realizing the sea change that President Trump represents. He wasted no time and spared little thought to their feelings when he heard of it.

With all that Congress has to work on, do they really have to make the weakening of the Independent Ethics Watchdog, as unfair as it â€¦ may be, their number one act and priority. Focus on tax reform, healthcare and so many other things of far greater importance!

Not that I’m complaining, but it’s bizarre to me how much power President-Elect Trump wields. I will say though that this was a great use of that power and shows that Trump isn’t likely to be a “Republican” POTUS.

This entry was posted on Sunday, January 15th, 2017 at 5:29 am and is filed under 2016 Election, Politics. You can skip to the end and leave a response. Pinging is currently not allowed.