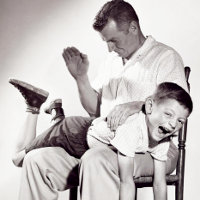 I also  love how the lower courts got spanked. 😉

In 2011 Jean Dorvil was arrested in Brockton, MA on charges of assault and Battery for spanking his child. During the trial the judge made the odd remark, “If you’re in public with your kids, it’s not appropriate to discipline in this fashion.” Dorvil then lost his appeal based on the appellate court’s view that the child lacked the capacity to understand the discipline and that the father spanked her “when he was upset and angry.”

This entry was posted on Monday, July 13th, 2015 at 10:52 am and is filed under Society. You can leave a response, or trackback from your own site.