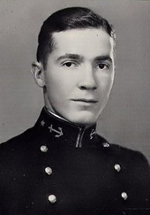 In January of 1945, during the final months of WW2, the already renowned science fiction author Robert Heinlein wrote a letter to one of science fiction’s greatest fans, Forrest Ackerman who many consider the founder of science fiction fandom. In the missive Mr. Heinlein offered his sincere and heart-felt condolences over Mr. Ackerman’s brother, Alden’s death during the Battle of the Bulge on New Year’s Day 1945 while he serving in the 11th Armor Division, 42nd Tank Battalion, D Company as the battalion was fighting its way to Bastogne to relieve the 101st Airborne.

Alden Ackerman was 21 years old at the time of of his death from a German air strike on the battalion which was securing Rechrival, Belgium.

Robert Heinlein did more than offer his condolences though. He also launched a blistering and cruelly accurate attack on the bulk of science fiction fandom of the time. Heinlein passionately condemned the inaction of most fans and, not without cause, blamed these fans for the death of Forrest’s brother, Alden.

The transcript and scan of Heinlein’s letter is from Letters of Note.

Our hearts are sore at your loss and there is nothing we can say to relieve your personal anguish. Your brother died a noble and heroic death. It is my belief that he did in fact die to make a better world; it is for us who live on to see to it that a better world is accomplished. I am heartened that you regard it as your duty to follow through on his unfinished work.

I will not be able to supply an article for the fan publication you propose to publish in his memory. I dislike to have to tell you that I will not be writing for you, under the circumstances, and I feel that you are entitled to a full explanation. Forry, every day I am writing things which are, literally, dedicated to Alden, and to the many, many others who have died and are dying. My daily writings are dedicated to getting the war won quicker with the fewest number of deaths of our own. My writings are laboratory instructions, engineering reports, letters to manufacturers, and other things having to do with the tedious work of scientific research for war. It takes up all of my energy and all of my imagination and I have none left over for other matters. If I had any energy left over, I would know that I was not doing all that I could do and I would then, in truth, be disloyal to your brother’s memory.

(I have, not a belief, not a conviction, but a knowledge of personal survival. You said on your post card that you wanted to discuss the matter with us someday. We will be honored to do so.)

Forry, you have sought my advice on matters which worried you in the past. You have not sought my advice in this matter, but I am going to presume on our old friendship to offer you some. I know that you are solemn in your intention to see to it that Alden’s sacrifice does not become meaningless. I am unable to believe that fan activity and fan publications can have anything to do with such intent. I have read the fan publications you have sent me and, with rare exceptions, I find myself utterly disgusted with the way the active fans have met the trial of this war. By the fan mags I learn that many of these persons, who are readily self-congratulatory on their superiority to ordinary people—so many, many of these “fans” have done nothing whatsoever to help out. Many of them are neither in the army nor in war work. Many have found this a golden opportunity to make money during a war boom—by writing, by commercial photography, through the movies, or by other worthless activities—worthless when compared with what your brother Alden was doing. These bastards let your brother die, Forry, and did not lift a hand to help him. I mean that literally. The war in Europe would have been over if all the slackers in this country had been trying to help out—would have been over before the date on which your brother died. The slackers are collectively and individually personally responsible for the death of Alden. And a large percent of fans are among those slackers. Alden’s blood is on their hands.

As for persons who are guilty not merely by sins of omission but who actively threw their weight against us, like that traitorous little bastard Jocquel, I have no words to describe them. It is a bitter thing that he should be alive while your brother is dead. It would be well for him to stay out of my sight when this is over. As for any of them, unless they have fought this war in every way they could to the best of their ability, I will not meet with them socially when this is over. I will not shake hands, speak, sit down, nor eat with them.

I am not alone in this opinion. You will find that my opinion is shared by Carnell and by Franklyn Brady. You will find it shared by many others of the grown-ups who know that a war is going on and know that it is not a game nor a joke nor a piece of fiction but a tragic business in which men like your brother Alden meet their deaths, too young and too horribly.

Forry, I want you to dedicate yourself to Alden’s memory. To be faithful to him we now have two jobs to do. The first is to win this war as quickly as possible. You can do that by volunteering for something more useful than you are now doing. General Lear has said that he needs thousands of limited-duty clerks and such behind the lines in Europe to release able-bodied men for action. Or, perhaps, a re-examination will find you no longer limited in duty. In either case a Wac can edit your camp paper. The second job is, now and after the war, to see to it that it shall not happen again. There are many ways to do that and each must select his own—political activity of every sort, writing intended to stir people up, the willingness to combat race hatred, discrimination, limitations of civil liberty, generalized hates of every sort, whenever and wherever they show up. But I am damn well sure that fan activity is not the way to serve Alden’s memory. Fandom has had a chance to prove itself and it has failed. I find the mags crowded with escapism and other nonsense; I find that fans now call themselves “Slans” (God save us!) on many occasions. I find many other evidences of group paranoia and of psychotic infantilism—and unwillingness to face up to adult problems and to cope with them. Forry, you may write the most inspiring things for a better world possible; if you direct them to this group, they will be worthless in carrying on with Alden’s unfinished work, for they will fall on sterile ground. I am not generalizing; there are a few adults among them and there was a fair percentage before the war. I do not indict any who are carrying their load. But there are many (and you know that I am right) who are doing nothing and did nothing to save your brother’s life. A bunch of neurotic, selfish, childish, insensitive and unimaginative, vicious bunch of jerks! It is time you quit associating with them and tackled the problems of the real world.

We are very fond of you, Forry. You are a fine and gentle soul. This is a very difficult letter to write; if I did not think you were worth it, I would not make the effort. This letter is for your eyes only; the ideas in it you are free to use but the letter is for you only.

I am very sorry your brother was killed; You may be sure that Leslyn and I will be faithful to his memory with all our strength.

What was true in the 1940s is just true today and Robert Heinlein would likely be no fonder of many within science fiction fandom today than he was of many of those during WW2. “A bunch of neurotic, selfish, childish, insensitive and unimaginative, vicious bunch of jerks,” who are afflicted with an odd and pernicious sort of , “group paranoia and of psychotic infantilism—and unwillingness to face up to adult problems and to cope with them,” still aptly, if unflatteringly and uncharitably, describes a solid majority of fandom today.

I’m not talking about the larger body of fans of science fiction, but rather the active members of “fandom.”

I’m not sure if I can properly describe and define that distinction because I have long been involved with the science fiction and fantasy scene and am, to some extent, effected by the same affliction and attitudes of the rest of them. Suggesting that you review the movies, Trekkies and Galaxy Quest, is the best that I can offer.

This is not to say that there are not good Americans and true within fandom’s ranks, for that would be a rank falsehood. It is just that such men and women are in the minority, just as they were when Heinlein wrote this letter to Ackerman.

This is truly a sad and bitter fact. Fandom had much to offer America but has failed to do so many, many times since its members, when not actually adhering to the philosophies of our enemies, hold themselves aloof as if they were too good to soil their hands with honest work in service to the nation that provides them with the freedom to pursue their pleasures.

This entry was posted on Sunday, May 30th, 2010 at 10:38 am and is filed under Books & Reading, Society. You can skip to the end and leave a response. Pinging is currently not allowed.