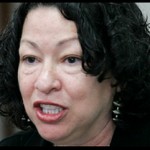 Since Judge Sotomayor a “wise Latina” we can’t fairly say that she is tap dancing before the Senate; that would be showing a streak of racial insensitivity. No, Sonia Sotomayor, President Obama’s nominee to the SCOTUS,  is “treating” the Senate to a show of Salsa dancing. 😉

With the Democrats’ majority assuring her confirmation, it’ a stint of theatrics, if little else.

Sotomayor, of course, started her dance with a Quick Back Step Movement – A New York Mambo classic – covering her earlier misstep involving the relative merits of the genders and races.

Whether born from experience or inherent physiological or cultural differences, a possibility I abhor less or discount less than my colleague Judge Cedarbaum, our gender and national origins may and will make a difference in our judging. Justice O’Connor has often been cited as saying that a wise old man and wise old woman will reach the same conclusion in deciding cases. I am not so sure Justice O’Connor is the author of that line since Professor Resnik attributes that line to Supreme Court Justice Coyle. I am also not so sure that I agree with the statement. First, as Professor Martha Minnow has noted, there can never be a universal definition of wise. Second, I would hope that a wise Latina woman with the richness of her experiences would more often than not reach a better conclusion than a white male who hasn’t lived that life.

With a flick of her hip and that Mambo back-step, Judge Sotomayor responds to this with,

I want to state upfront, unequivocally and without doubt: I do not believe that any ethnic, racial or gender group has an advantage in sound judging. I do believe every person has an equal opportunity to be a good and wise judge, regardless of their background or life experience.

The words I chose, taking the rhetorical flourish, it was a bad idea I do understand that there are some who have read this differently, and I understand why they might have concern.

So, Sotomayor didn’t really mean what she said. It was just rhetoric – a poor choice of words that she regrets because some people might have taken them the wrong way. Yeah. Right. Sure.

There’s sadly a whole plethora of White Men who have over the course of time tried that same Quick Back Step Movement when called on a variety of statements quite similar to Sotomayor’s. We call them Racists and we revile them. In fact, we normally revile them even more when they try such smooth moves to deflect such accusations of racism. I’m sure though that Judge Sotomayor will, once again, get the benefits of Affirmative Action and not be held to the same standard as those White Men.

And Sotomayor’s dance before the Senate, alternatively partnered by Democrats and Republicans, continued unabated and consistently graceful in its empty measures and well turned steps.

Obama’s nominee, obviously carefully coached by Obama’s administration and by the Democrats in the Senate, carefully sidestepped and/or spun around any direct questions about her judicial history. She also, being a “Wise Latina,” carefully failed to provide any substantive answers on her views on the law and the role of the SCOTUS.

All in all it has been, to date, a beautiful dance by Sonia Sotomayor.

Yes, a beautiful dance and great theater – but lacking in substance and meaning insofar as the Judicial branch of the US government is concerned. The Democrats rule the US Senate with a filibuster-proof majority; Sotomayor’s confirmation as a SCOTUS Justice is assured, a foregone conclusion.

Sotomayor’s confirmation hearing isn’t about the Judicial; it’s about the Legislative and, to some extent, the Executive and their respective elections in 2010 and 2012. It’s about the minority, especially the Hispanic, vote in those upcoming elections.

Sotomayor’s sole job during these hearings is to give the Democrats what they want while not saying anything that could be used by the Republicans to get what they want. Whether or not she can accomplish those limited, but still difficult, goals will not be evident until we’re closer to the elections in question.

Until then dance, dance, dance while Death’s clock ticks towards Doom and the nation burns…

This entry was posted on Wednesday, July 15th, 2009 at 10:43 am and is filed under Politics. You can skip to the end and leave a response. Pinging is currently not allowed.