OK, this is one of those questions that is stupid to ask yet which must be asked anyway. Of course the concerned American, especially if White as depicted above, is vastly more offensive to Obama than anything a Muslim jihadi says. 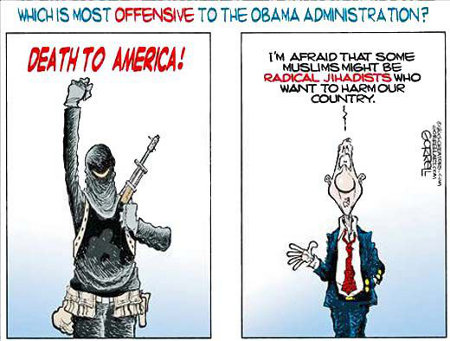 Which Is Most Offensive To Obama?

All evidence points to the fact that “Death to America” resonates with Obama. The boy just has some issues with how overt the jihadis are and with their chosen methodology. In this Obama is the same as the majority of Muslims worldwide.

Remember, Obama didn’t come here to praise America; he came here to bury it. Any problems that he has with the jihadis is based upon their getting in the way of his doing that in his own way.

This entry was posted on Tuesday, December 15th, 2015 at 10:55 am and is filed under Politics. You can leave a response, or trackback from your own site.