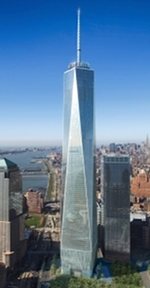 On Thursday, March 26, 2009 the Port Authority of New York & New Jersey, who own the land upon which the World Trade Center towers stood, announced that the new skyscraper being built to replace the buildings destroyed by Islamic terrorists on September 11, 2001, will no longer be named the Freedom Tower. It will be given the name, One World Trade Center, which has technically always been its legal name and street address.

The change from Freedom Tower to One World Trade Center was announced on Thursday at a news conference where the Port Authority revealed the signing of the first commercial lease in the building by a Chinese company to create the China Center, a 190,810-square-foot business and Chinese cultural facility in downtown NYC.

We’ve referred to the primary building planned for the site as One World Trade Center — its legal name and street address — for almost two years now, as well as using the name the Freedom Tower.

Many will always refer to it as the Freedom Tower, but as the building moves out of the planning stage and into full construction and leasing, we believe that going forward it is most practical to market the building as One World Trade Center.

The fact is, more than $3 billion of public money is invested in that building, and, as a public agency, we have the responsibility to make sure it is completed and that we utilize the best strategy to make certain it is fully occupied.

Immediately upon the signing of the contract, the China Center granted the Port Authority a $10 million USD letter of credit. 😉

They can call it marketing all they want, but I think the timing of the announcement shows that they just couldn’t stomach calling it the Freedom Tower after leasing nearly 10% of it to China.

The current plan is for the China Center at One World Trade Center to house the elite of China’s business and cultural communities and serve as a beachhead for Chinese firms developing United States operations.

Of course the Chinese are “requesting” that the Empire State Development Corporation subsidize their rents to the tune of  $954,050 per year for 15 years.

One doesn’t have  to wonder if the Chinese understand the slight carried by the Port Authority’s chosen timing for the public announcement of the name change; the Chinese have a 6000 year history of insults, pride, and “face.” One does have to wonder if they care though.

I’m fairly sure, with China’s ownership of a huge portion of America’s debt and with the Obama administration’s plans to greatly increase that debt, that the Chinese view the new  China Center as something between a way of overseeing their investment in America and a Provincial Capitol. A few veiled insults from their “tenants’ aren’t going to amount to much.

It’s appropriate then -IMHO – that One World Trade Center no longer be  named the Freedom Tower; such a naming would be a mockery.

This entry was posted on Sunday, March 29th, 2009 at 8:27 am and is filed under Politics, Society. You can skip to the end and leave a response. Pinging is currently not allowed.

3 Responses to “Freedom No Longer”