The wise man knows that, if you’re at the bottom of a hole and want to get out of it the first thing that you do is stop digging. Of course wisdom can come through experience and accountability, neither of which apply to Obama who has little or none of the former and who has never been subject to the latter.

Obama cares only about continuing to avoid being held accountable for his words and deeds and prefers to spin things so as to make such wisdom and those charitable enough to provide it to him the villains. 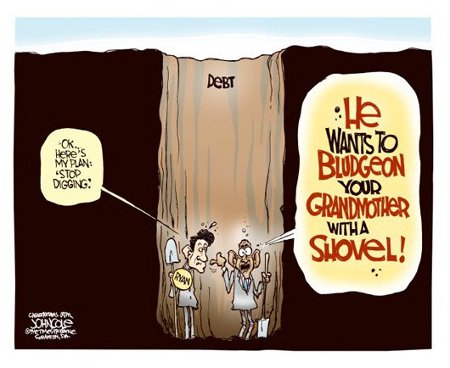 Not, of course, that Obama would ever say such things himself. He and his handlers have proxies for that so that they can even avoid accountability for even that and they use them in their attempt to “control the message”

Hmmm…Who’s the only one who threatened to withhold SSI checks if he didn’t get his way? Then, he did throw his own grandmother under a bus during his ’08 campaign.

Fortunately for Americans, fewer and fewer believe his lies, half-truths, obfuscations, and empty rhetoric. As is always the case in America, shucking and jiving will only get one so far; sooner or later one has to face the music and the lash or the proverbial noose.

Equally as fortunate for Americans is the fact the our domestic enemies, the Liberals and Progressives no longer seem to believe Obama’s lies, half-truths, obfuscations, and empty rhetoric either. Their hatred for America and Americans is so virulent that they’re more likely to metaphorically string him him up than Americans are, all because he has failed to be the messianic dictator that they longed for.

It seems that Obama and his overseers never learned that controlling the message only works when you’ve got at least a minimum level of credibility based upon the contents of your character and a proven track record of actual results.

This entry was posted on Wednesday, August 10th, 2011 at 5:47 am and is filed under Politics. You can skip to the end and leave a response. Pinging is currently not allowed.

3 Responses to “Controlling The Message”