One of Obama’s biggest problems is that he’s too small to fill the shoes of his own 2008 campaign “promises.” Big shoes, small man – it’s a problem for him as he struggles to keep his job. 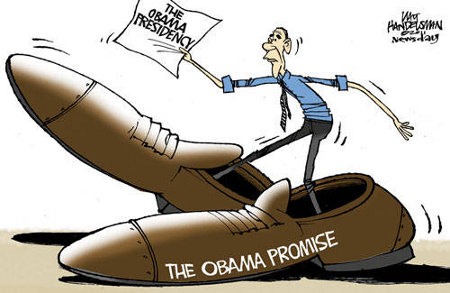 The funniest part is that Obama didn’t make a lot of real campaign promises in the 2008 election. Instead, he made a lot vague but well worded not-quite-promises about a plethora of Liberal and Leftist issues and then smiled as the sheep wrote their own dreams unto the tabula rasa he presented to them.

So it wasn’t really his promises that Obama is to small of a man to keep. It’s that Obama is too small, too weak, and to venal for his presidency to live up to the “Promise” that the he allowed the Left and their minority tenants to create for him.

This entry was posted on Wednesday, December 28th, 2011 at 10:29 am and is filed under 2012 Election, Humor, Politics. You can leave a response, or trackback from your own site.