And Another One Down 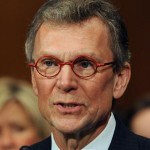 I just posted on how Nancy Killefer withdrew her candidacy for US Chief Performance Officer because she couldn’t seem to pay her taxes correctly and on time.

Well, today is a busy day Democrats – Killefeger drops out in the morning and in the early afternoon, when Obama should be prepping for his interviews for shilling the Stimulus…

Tom Daschle, Obama’s choice for Health and Human Services (HHS) Secretary, just withdrew his candidacy over the various tax evasion and potential corruption issues he was having.

That’s another one down – two in a single day.

Damn! Is it beyond their capabilities for Obama and his team to actually work this stuff out before announcing the nomination? Or it that they believe that it’s only Joe and Jane Sixpack who are expected to pay their taxes, and so are surpised when people have problems with their nominees for high office?

This entry was posted on Tuesday, February 3rd, 2009 at 1:41 pm and is filed under Politics. You can skip to the end and leave a response. Pinging is currently not allowed.

One Response to “And Another One Down”