Upon his election President Obama created the Cabinet post of Chief Performance Officer (CPO). The purpose of this office is said to be to help improve government efficiency and reform budget practices. The CPO will also serve as the Office of Management and Budget’s deputy director for management. President Obama’s choice for the first person to hold this position was Nancy Killefer. 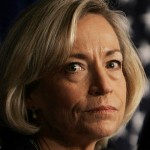 Obama said that Killefer will strive to find areas that “can make big change that lasts beyond the economic recovery plan and save taxpayer money over the long term.”

Obama said that Killefer was “uniquely qualified” to serve as the nation’s first CPO, calling her “an expert in streamlining processes and wringing out inefficiencies so that taxpayers and consumers get more for their money.”

There’s a problem though – Nancy Killefer has withdrawn her candidacy to be the first Chief Performance Officer for the US federal government because  it was discovered that she had failed for over year and a half to pay employment taxes on household help consisting of two nannies and a personal assistant. The D.C. Department of Employment Services had actually put a lien on her property for $946.69, which it still took Killefer almost 5 months to pay off. The lien was for $298 in unpaid taxes, $48.69 in interest and $600 in penalties.

How, pray tell, can anyone expect a woman who doesn’t bother to keep her house in order to keep the federal government’s programs and budgets in order? Does Obama, his advisers, and his transition team even bother to vett his choices?

This entry was posted on Tuesday, February 3rd, 2009 at 11:45 am and is filed under Politics. You can skip to the end and leave a response. Pinging is currently not allowed.

3 Responses to “A Lackluster Performance”