Last month Obama got up in front of supporters in Florida and compared his presidency and reelection bid to a ballgame and wanted to ensure everyone that he’s a fourth-quarter player. 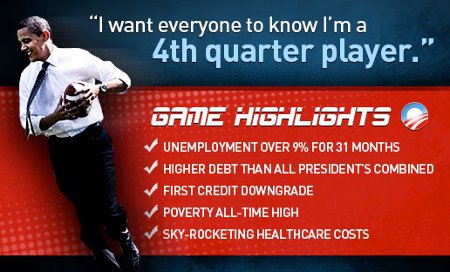 That’s a large part of America’s current problem; to Obama this is all a game. Worse even, he doesn’t even “have game.” He’s just a narcissistic “playa” manipulating the gullible for his own selfish reasons.

It’s time to bench his worthless ass. The boy never should have been brought up from the minors in the first place.

This entry was posted on Wednesday, November 9th, 2011 at 9:51 am and is filed under Politics. You can skip to the end and leave a response. Pinging is currently not allowed.