Hillary’s made a big deal about the GOP’s supposed “war on women.” Certainly, the toxic womyn who support her eat up it like chocolate. That’s why Hillary – evil, corrupt, and staunchly anti-American, but not stupid – based her entire campaign on it. 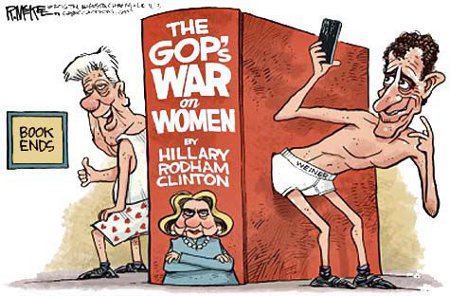 That she’s been successful at this is proof that these females and the self-hating pseudo-males who enable them just don’t care past tokenism and appearances. After all, even as Hillary shrilling rants the dogma of radical feminism, look at what she surrounds herself with.

This entry was posted on Monday, November 7th, 2016 at 6:58 am and is filed under Announcements. You can leave a response, or trackback from your own site.