Yes, except in the minds of a few delusional Progressives, it’s undebatable that Hillary Clinton will be the Democrats 2016 Nominee for POTUS. Neither the DNC nor their ever-complicit Lamestream media would have any other way and their not shy about proving this. 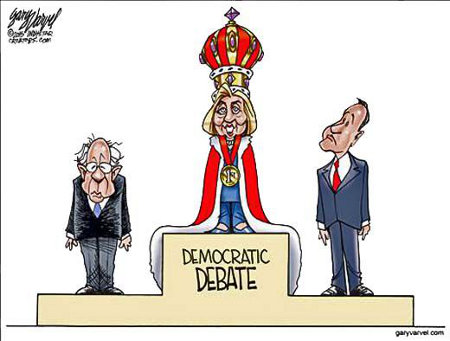 The Dems have had only two debates compared to the GOP’s five and both of those were seemingly geared towards Hillary and we’re, in general very soft and genial. And yet, these two debates have been the highlight of Hillary’s campaign so far. As for the rest of it, what there has been, her campaign has been studiously ignored by the Lamestream media.

This silence is to Clinton’s benefit. It keeps her out of the news and limits the opportunity for people to know about what she’s said that they won’t like. This in turn saves her money because she doesn’t have to pay for damage control.

Yep. It’s undebatable that the fix is in and Hillary is the Heir Presumptive for the Democrats.

This entry was posted on Monday, December 28th, 2015 at 12:37 pm and is filed under 2016 Election, Politics. You can skip to the end and leave a response. Pinging is currently not allowed.