It appears that the deep, deep, deep blue state of Massachusetts is still, even after 240 years of increasing Liberalism, a hotbed of rebellion against foreign overlords. 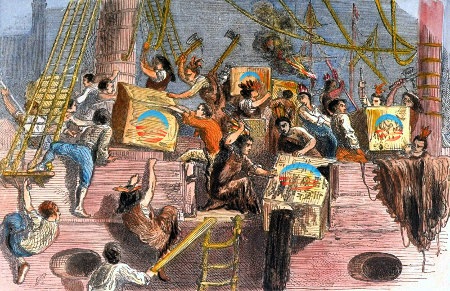 Despite being the state that beta-tested Obamacare, they’ve decided that they need to throw it or, at least, parts of it into Boston Harbor.

In particular, they have no use for the stupid, destructive, and unthinkingly restrictive and punishing rules that Obamacare will inflict upon the engine that drives Massachusetts’ economy, small businesses.

The editorial, entitled, â€œMass. Needs An Obamacare Waiver for Small-Business Health Plans,â€ argues that while the state has â€œmade a concerted effort in the last few years to rein in health care costs for small businesses,â€ the fact is that â€œnew federal regulations written to implement the Affordable Care Act threaten to undercut those efforts â€” and saddle thousands of Bay State businesses with big increases in premiums.â€

Last December, Massachusetts officials wrote to federal regulators, suggesting the possibility of a waiver from the new rating factors for small businesses that are required under Obamacare. The letter indicated that the regulations would result in a substantial number of citizens experiencing, â€œextreme premium increases.â€

While the commonwealth previously allowed insurers to rate on factors such as age (2-to-1 rate band), industry type, participation rates, and group size, the new Obamacare regulations only permit health plans to adjust premiums based on individual vs. family enrollment, geographic area, tobacco use, and age (3-to-1 rate band). Hence, the new federal rules are much more restrictive.

This, coming from the state that already implemented “universal” socialized health insurance – and which continues to pay a drastic and painful economic price for doing so – must be sticking in the craws of the Obama Regime like a chicken bone.

To make matters worse for the Campaigner-in-Chief, there’s little hope that he can shuck, jive, and twist things around enough to placate the Bay Staters by blaming it on “King” George.

NOTE: The MA politician that you won’t see rebelling in Boston Tea Party fashion against Obamacare is, ironically, the one that consistently and fraudulently claims she has the most right to dress as an Indian, Elizabeth Warren. She’s not the sort to leave the reservation. 😉

This entry was posted on Tuesday, March 12th, 2013 at 12:09 pm and is filed under Politics. You can skip to the end and leave a response. Pinging is currently not allowed.