Vindication, much like revenge, is a dish best served cold. That is never more true than in politics. 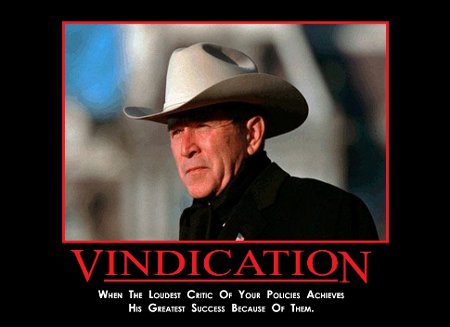 The Vindication of President Bush

Obama and the domestic enemy of America can shuck and Jive all that they want to, but that sort of political tap dancing won’t change the simple fact that Obama couldn’t have successfully ordered Osama in Laden’s extermination without all the groundwork that was laid by President George Bush Jr. and which Obama either chose to- or was forced to by his campaign coterie to abide by.

This entry was posted on Saturday, June 4th, 2011 at 5:16 pm and is filed under Humor, Politics. You can skip to the end and leave a response. Pinging is currently not allowed.