Of Chickens and Roads 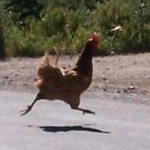 In the past I’ve discussed fish and fishing, and the variety of responses one might get on the subject of teaching a man to fish.

Let’s now look at the age-old riddle, “Why did the chicken cross the road?”

What made the 19th century joke funny in its original form funny was that the answer, “To get to the other side” was so blatantly self-evident.

What answers to that riddle might some famous and/or infamous people make, finding them to be blatantly self-evident?

Sarah Palin:
The chicken crossed the road because gosh-darn it, he’s a maverick!

Barack Obama:
The chicken crossed the road because it was time for change! The chicken wanted change!

John McCain:
My friends, that chicken crossed the road because he recognized the need to engage in cooperation and dialogue with all the chickens on the other side of the road.

Hillary Clinton:
When I was First Lady, I personally helped that little chicken to cross the road. This experience makes me uniquely qualified to ensure right from Day One that every chicken in this country gets the chance it deserves to cross the road. But then, this really isn’t about me.

Bill Clinton:
I did not cross the road with that chicken.

Monica Lewinsky:
I can prove the chicken crossed the road. I saved the tracks of it doing so.

George W. Bush:
We don’t really care why the chicken crossed the road. We just want to know if the chicken is on our side of the road, or not. The chicken is either against us, or for us.. There is no middle ground here.

Colin Powell:
To the left of the screen, you can clearly see the satellite image of the chicken crossing the road.

Al Gore:
I invented the chicken.

John Kerry:
Although I voted to let the chicken cross the road, I am now against it! It was the wrong road to cross, and I was misled about the chicken’s intentions. I am not for it now, and will remain against it.

Al Sharpton:
Why are all the chickens white? We need some black chickens.

Cynthia McKinney
It’s because of the “Joos!” The “Joos,” aided by America, forced that chicken off its land and made it flee across the road.

Ban Ki-Moon
The UN strongly believes it is due to the catastrophe of Global Warming. We request $24 Billion from member states to create a special commission to study Global Warming’s effects upon chicken migrations and to draft the UN Convention on Poultry Rights. Israel, of course, will be the first nation charged under that convention.

Oprah Winfrey:
Well, I understand that the chicken is having problems, which is why he wants to cross this road so bad. So instead of having the chicken learn from his mistakes and take falls, which is a part of life, I’m going to give this chicken a NEW CAR so that he can just drive across the road and not live his life like the rest of the chickens.

Anderson Cooper:
We have reason to believe there is a chicken, but we have not yet been allowed to have access to the other side of the road.

Nancy Grace:
That chicken crossed the road because he’s guilty! You can see it in his eyes and how he walks.

Pat Buchanan:
To steal the job of a decent, hardworking American.

Martha Stewart:
No one called me to warn me which way that chicken was going. I had a standing order at the Farmer’s Market to sell my eggs when the price dropped to a certain level. No little bird gave me any insider info.

Jerry Falwell:
Because the chicken was gay! Can’t you people see the plain truth? That’s why they call it the ‘other side.’ Yes, my friends, That chicken is gay. And if you eat that chicken, you will become gay too. I say we boycott all chickens until we sort out this abomination that the Liberal media whitewashes with seemingly harmless phrases like ‘the other side.’ That chicken should not be crossing the road. It’s as plain and as simple as that.

Barbara Walters:
Isn’t that interesting? In a few moments, we will be listening to the chicken tell, for the first time, the heart warming story of how it experienced a serious case of molting, and went on to accomplish it’s lifelong dream of crossing the road.

Bill Gates:
I have just released eChicken2010, which will not only cross roads, but will lay eggs, file your important documents, and balance your checkbook. Internet Explorer is an integral part of eChicken2010. This new platform is much more stable and will never reboot.

Albert Einstein:
Did the chicken really cross the road, or did the road move beneath the chicken?

Colonel Sanders:
Did I miss one?

Charlie Sheen:
Because he realized that he’s like a Rock Star from friggin’ Mars and he deserved to be on the other side of the street with the Goddess chickens. DUH…it’s called “Winning”!!!

Enjoy! 🙂 And feel free to make any additions you wish via the Comments…

This entry was posted on Monday, March 7th, 2011 at 10:15 am and is filed under Humor, Politics, Society. You can skip to the end and leave a response. Pinging is currently not allowed.

One Response to “Of Chickens and Roads”