As what would be called rioting and insurrection or protests, depending upon one’s views, continues to escalate and grow even more violent in Egypt it becomes obvious that Egypt’s President, Muhammad Hosni Sayyid Mubarak is not going to be in office much longer. 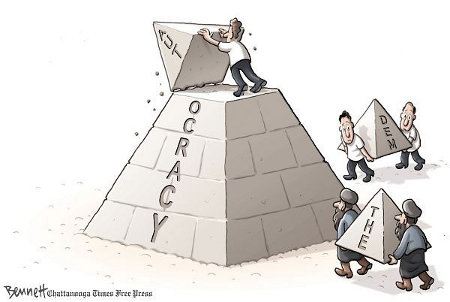 Hope For The Best But Plan For The Worst

The Civilized World now has to focus on what Egypt will become once the current government is removed.

Egypt could become a solid democracy, at least for a while, and continue as a respected ally of America and the West; it could become a Islamist Theocracy, either overtly or effectively despite whatever trappings of democracy remain; or it could descend into anarchy for years as one failed single party or coalition government after another implodes.

Sadly, two out of three of those options, and the two most probable ones, turn Egypt into just another failed Muslim quasi-State that is a hotbed and safe haven for Islamic Terrorism.

This entry was posted on Thursday, February 3rd, 2011 at 12:46 pm and is filed under Politics. You can skip to the end and leave a response. Pinging is currently not allowed.