By this point everyone has to know that ObamaCare is a failure, it having died a horrible death due to both its intrinsic flaws and its subnormal implementation. Even the Liberals know this, though they’re loath to admit except in the course of blaming Americans for its failure.

What’s interesting, however, is the specific steps that Obama and his handlers have been attempting to revise ObamaCare via various Executive Orders, all of which are only quasi-legal at best. 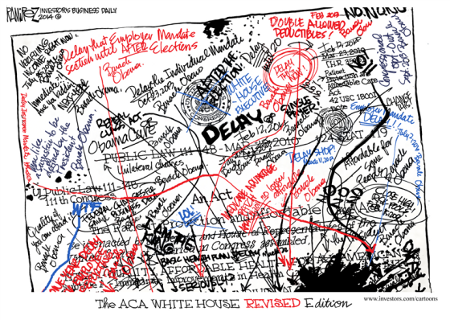 As is the boy’s wont, most of Obama’s revisions to his failed flagship “achievement” have been commits to not enforce various provisions of the law. With no correction or solution in sight, Obama and his overseers seem to seek to delay the actual implementation of ObamaCare until it’s someone else’s problem.

This entry was posted on Friday, February 14th, 2014 at 8:42 am and is filed under Politics. You can leave a response, or trackback from your own site.