Obama has always seemed to be dead set against ever letting a crisis go to waste. But what’s a boy to do when there’s no crisis to take advantage of? Invent one of course! 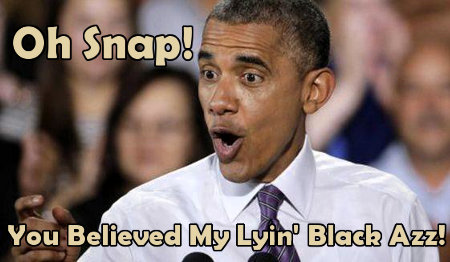 During the 2014 budget crisis, the Obama Regime swore up and down – literally and legally, as in sworn testimony – that it hadn’t made a decision to prioritize principal and interest payments in the event the debt ceiling were not raised. In other words, they made an implied threat that, if the debt ceiling wasn’t raised, they would likely default on America’s various international loans.

This was, however, a repeated series of yet another one of Obama’s lies. As it turns out, the Obama Regime had already worked out the prioritization and scheduling of loan repayment. They just withheld the information because the Obama Regime wanted to maximize pressure on Congress by limiting communications about their contingency planning.

That’s Obama for you. If he can’t twist and lie about real crisis, the filthy, misborn boy will just invent one.

This entry was posted on Tuesday, February 9th, 2016 at 1:03 pm and is filed under Politics. You can leave a response, or trackback from your own site.