The ever-compliant to Obama MSM has had an interesting take on Obama’s murder of four Americans – or should that be four more Americans, given Fast & Furious and other, previous criminal acts by the Obama Regime that killed Americans? – when they deigned or were told to report upon the situation at all. 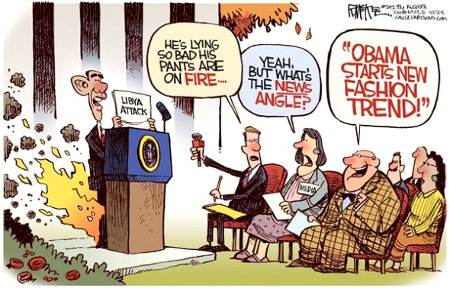 Despite that fact that real journalists’ investigations and Congressional inquests have uncovered an ongoing and rampant cover-up constructed of a mixture of silence, outright lies, and misinformation of the Obama Regime’s malfeasance and incompetence in dealing with the Muslim threat to America’s Consulate in Benghazi, Libya, the lamestream media has preferred to support Obama’s mendacity and, when they comment upon Benghazi at all, spin things into a pro-Regime distraction.

The MSM is right on one point though. Obama is a trend-setter…in the same manner that Gaius Julius Caesar, Maximilien Robespierre, and Adolf Hitler were trend-setters in their times and places.

This entry was posted on Monday, February 11th, 2013 at 8:07 am and is filed under Politics. You can skip to the end and leave a response. Pinging is currently not allowed.