“Hope & Change,” the mantra of the Obama Regime, resonated and continues to resonate with the boy’s followers. 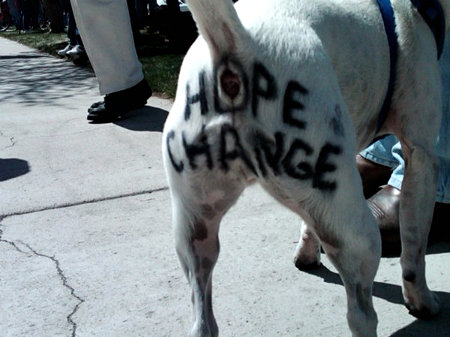 Americans and their dogs, however, seem to have a different view of Obama’s hope of fundamentally changing America into something wholly different and unrecognizable as the country we love.

They’ve seen what’s happened under the Obama Regime and know that, in 2013, Hope and Change looks like nothing other than some animal defecating upon America’s Constitution and the American people.

This entry was posted on Saturday, January 19th, 2013 at 12:20 pm and is filed under Humor, Politics. You can leave a response, or trackback from your own site.