It seems that United States Postal Service (USPS) is about to collapse into what is effectively bankruptcy unless Congress votes them a bail-out to the tune of $5.5 billion in taxpayers’ dollars. 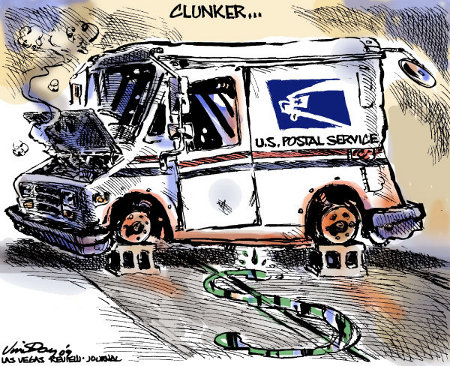 I’d ask how the USPS, which holds a federally mandated monopoly in many message delivery markets could be such a clunker but the answer to that is readily apparent. The combination of federal bureaucracy and union labor rendered the USPS unable to adapt to the changes in their market.

Please remember, even though it’s too late, that Obama joked joked about the USPS’ problems before while shilling ObamaCare. Think about that and what it bodes for our future.

So the questions are: will Congress give $5.5 billion in cash to this clunker so that they can their bills and meet their legally required union pension obligations, and if they don’t and the USPS doesn’t pay their retirees will the Liberals rant and rail about the “Evil Mail Giant” like they would if this was a private corporation?

This entry was posted on Thursday, September 8th, 2011 at 3:43 pm and is filed under Politics. You can skip to the end and leave a response. Pinging is currently not allowed.