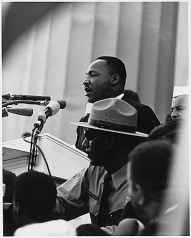 Forty-four years ago on August 28, 1963 Dr. Martin Luther King, Jr. stood on steps of the Lincoln Memorial and delivered his historic speech, “I Have a Dream.” Dr. King spoke of his desire for a future where Black people and White people would coexist as equals before to over 200,000 civil rights supporters during the March on Washington for Jobs and Freedom. The speech is widely considered to be one of the greatest speeches in history and was ranked the top American speech of the 20th century by a 1999 poll of scholars of public address.

Hailed as a one of the great masterpieces of rhetoric, Dr. King’s speech resembled the passionate style of a Black Baptist sermon. It appealed to such iconic and respected sources as the Bible and invokes the United States Declaration of Independence, the Emancipation Proclamation, and the United States Constitution.

“I have a dream that one day this nation will rise up and live out the true meaning of its creed: ‘We hold these truths to be self-evident, that all men are created equal.”

“I have a dream that my four little children will one day live in a nation where they will not be judged by the color of their skin but by the content of their character.”

Legend holds that King departed from his prepared text and began preaching extemporaneously, but he had delivered a similar speech incorporating some of the same sections in Detroit in June 1963, when he marched on Woodward Avenue with Walter Reuther and the Rev. C.L. Franklin, and had rehearsed other parts.

In the wake of the speech and march, King was named Man of the Year by TIME magazine for 1963, and in 1964, was the youngest person awarded the Nobel Peace Prize.

In 2003, the National Parks Service dedicated an inscribed marble pedestal to commemorate the location of King’s speech at the Lincoln Memorial

This entry was posted on Tuesday, August 28th, 2007 at 12:19 pm and is filed under Society. You can skip to the end and leave a response. Pinging is currently not allowed.