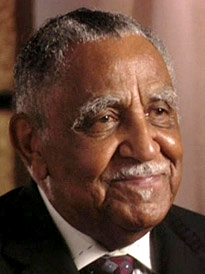 Pastor Joseph Lowery, who got its fame by suborning its religious position to preach anti-White hate from the pulpit during the 1950’s and 1960’s, and who gave the benediction at Obama’s inauguration, isn’t the least bit shy about its hatred for Whites and America.

Age and the achievement of every single reasonable goal of Civil Rights movement hasn’t mellowed this jabbering ape or brought it wisdom.

Lowery, speaking as an ordained minister, bluntly claims that all Whites will burn in Hell.

This it not surprising. It’s part of the orthodox canon of the terrorist cult, Black Liberation Theology that either God must damn all Whites or Blacks must destroy God.

Lowery said that when he was a young militant, he used to say all white folks were going to hell. Then he mellowed and just said most of them were. Now, he said, he is back to where he was.

It would be easy for Americans to judge this mockery of Man for spewing its racism and hate but it would be wrong an hubristic for any of us to do so. It is not our place to pass judgement on this creature and its ilk. It is, however, both an American’s place and duty to God and Country to send it and its cohorts to such judgment!

I ask no man or woman to die for our country. I ask that they do everything in their power to ensure that our enemies and all of the blood of our enemies, foreign and domestic, die for theirs.

This entry was posted on Thursday, November 1st, 2012 at 1:50 pm and is filed under 2012 Election, Politics, Religion, Society. You can leave a response, or trackback from your own site.