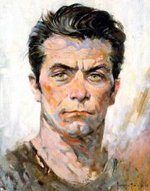 On Monday, May 10, 2010 the legendary artist Frank Frazetta died of a stroke at the age of 82 in hospital near his home in Boca Grande, FL. Our world has grown just a bit more drab and dreary with the passing of Mr. Frazetta who was one of the true greats of 20th century art and who inspired so very many people over the course of his life and career.

He had been heroically battling severe and chronic illness for well over a decade. Sadly, this last stroke was just too much – even for him.

Frank Frazetta painted heroes defending fair damsels from the very spawn of Hell and inspired whole generations of artists, game designers, writers, musicians, and film makers with his works over his 40+ year career. Yet, in many ways Frank was every bit as much of a hero as the characters he brought to life with his brush and his fire. When the strokes took his good right hand – think about that – he trained himself to paint with left and kept on going, indomitable and passionate.

But, while I’m saddened by his passing out of our lives, I’m not too shocked that Frank finally laid down his arms and his brush and let the reaper claim him. In July of 2009 Frank’s great love, muse, and wife of 53 years, Ellie, died after a long battle with cancer. With his children long grown and with families of their own it’s not odd or shocking that chose to follow Ellie. 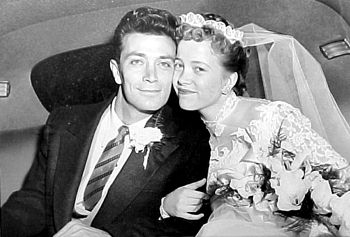 One of Frank & Ellie’s Wedding Photos From 1956

People can, have, and will continue to write volumes about Frank Frazetta and his wife and partner, Ellie. I’m not really up to that challenge right now. But they say that picture is worth a thousands words, so below are 18 thousands worth worth of tribute and eulogy.

Frank, may you find fair winds and following seas under whatever strange and wondrous stars you and Ellie find yourselves. If you run into to David and Leigh, please say hello for me.

This entry was posted on Wednesday, May 12th, 2010 at 1:49 pm and is filed under Books & Reading, Society. You can skip to the end and leave a response. Pinging is currently not allowed.