During his campaign to become the 44th President of the United States Barack Obama repeated claimed that he wanted to change America, a country that he found to be fundamentally flawed – though he professes to love it.  It seems that President Obama has concocted a methodology for doing this.

Hidden behind all the hoopla over President Obama and his democrats’ ill-considered Stimulus Bill is a quiet but significant attempt to consolidate power within the hands of White House personnel and change the very makeup of America and its representation in its government. 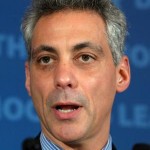 President Obama wants to place the U.S. Census Bureau under the direct control of the White House, specifically his Chief of Staff, Rahm Emanuel. This would allow President Obama to control the very shape and formation of America, or at least how it is reported.

That would certainly allow President Obama to enact fundamental changes to our nation.

This is important and should not be ignored by the MSM or the American people. The US Census is critically important to the very fabric our how our nation operates.

With all of its political implications, hijacking the Census from the Commerce Dept. and letting it be run out of Rahm’s office is like putting PETA in charge of issuing hunting permits.

All DeLay did was rearrange the deck chairs. This would allow Rahm to redesign the whole ship affecting everything from congressional districts to who and where eligible S-CHIP children, adults and ‘poor’ rich people live.

With the 2010 census on the horizon, it’s highly probable that Obama and Emanuel will attempt to redraw congressional districts so that they are assured a Democrat majority in Congress for the foreseeable future. The census also determines how almost all federal and state programs are funded.

Also, given the fact that senior White House officials announced that the census director would report directly to the White House in response to Black and Hispanic leaders complaining about Commerce Secretary-nominee Judd Gregg, there may be additional darker motivations for placing the U.S. Census Bureau under the control of the White House instead of the Commerce Department.

Sadly but not surprisingly, the MSM media outlet to cover this “coup” was FOX News. The rest of them are apparently to interested in being President Obama’s propaganda corps to do their jobs as long ago those jobs were envisioned to be done.

This entry was posted on Sunday, February 8th, 2009 at 8:55 am and is filed under Politics. You can skip to the end and leave a response. Pinging is currently not allowed.