Balducci’s, a gourmet market in New York’s Greenwich Village, accidentally found itself in an embarrassing situation. Sometime over the weekend a store clerk mistakenly put a sign over a set of hams describing them as “Delicious for Hanukkah.”

Manhattan novelist Nancy Kay Shapiro, a self-professed unobservant Jew, noticed the advertisement of trafe – unclean, forbidden foods – for Chanukah. Instead of being offended, Ms. Shapiro took photographs and posted them on the web. 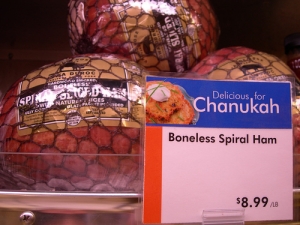 I just thought it was funny, I wasn’t offended in any way. I just thought, here’s somebody who knows nothing about what Jews eat.

— Nancy Shapiro
Author of What Love Means To You People

When Ms. Shapiro returned to the store on Tuesday, the first night of Chanukah, the signs had vanished. A manager at the Balducci’s gourmet grocery store apologetically said that the sign had been a mistake and blamed it on a stock clerk.

Thank you, Ms. Shapiro! Where many people would have been grossly offended, you showed good humor and tolerance for other’ ignorance and fallibility.

Posted in Politics on December 6th, 2007

Are there Islamists in Commerce? No, I don’t mean Muslim radicals who have commercial sector jobs; we know those people exist. I mean are there Islamists in the US Department of Commerce. Archaeologyknits points out in this article that The US Secretary of the Commerce Carlos Gutierrez proudly displays a copy of the radical Islamist creationist Atlas of Creation in his office.

The book contains a photograph of one of the planes striking the World Trade Center, captioned:

No matter what ideology they may espouse, those who perpetrate terror over the world are, in reality, Darwinists. Darwinism is the only philosophy that places a value on-and thus encourages conflict.

This does not seem the sort of manuscript an appointed member of the US government should be giving “pride of place” to in his federally funded office. A recent visitor to the office told Ken Silverstein from Harpers Magazine that the Atlas would be impossible to miss, both because of its huge size–it weighs approximately 12 lbs and has nearly 800 pages–and because it is prominently displayed on a stand at the entrance to the waiting room for Sec. Carlos Gutierrez’ office. One has to wonder what Mr. Gutierrez is thinking.

One point should be kept in mind: The main reason for the continuing cruelty, conflict, and other ordeals endured by the vast majority of people is the ideological prevalence of disbelief. This can be ended only with the ideological defeat of disbelief and by conveying the wonders of creation and Qur’anic morality so that people can live by it.

In this effort, the books of Harun Yahya assume a leading role. By the will of God, these books will be a means through which people in the twenty-first century will attain the peace, justice, and happiness promised in the Qur’an.

I’m not sure that this is something I would want to see displayed in a federal office, especially the Department of Commerce. If Carlos Gutierrez subscribes to- or even sympathizes with the views of this radical Islamic creationist, the American people may experience some very nasty long-term problems. On the other hand, it is completely legal for Sec. Gutierrez to display any book he so desires in his offices – though the ACLU might find this as objectionable and actionable as any other religious reference or icon displayed on government or public property.

On the brighter side, it’s strangely comforting to know that Islam has its share of wackjob, wingnut creationists too! ðŸ˜›