Not A Christian Nation? 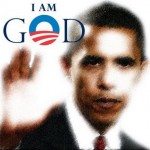 Liberals and Progressives make a lot of claims about the level and nature of religiosity in America. As can be expected whenever these Leftists make any claim about the nature of America, these are spurious things with little or no grounding in observable fact.

Back on June 28, 2006, Obama infamously made this a bold and bald statement, though he did nod his head metaphorically to the Christian foundation of America.

Whatever we once were, we are no longer a Christian nation – at least, not just. We are also a Jewish nation, a Muslim nation, a Buddhist nation, and a Hindu nation, and a nation of nonbelievers.

Now, to plagiarize Obama, let me be clear. In the full context of Obama’s “Call to Renew” speech what he said was neither horrific nor technically factually inaccurate. His lie was one of false equivalency and demanding that a nation be 100% homogeneous in order to be something.

US religious Landscape Circa 2008

One must also consider the fact that a significant percentage of those who are not Christian per se are followers of faiths that are de facto Christian in nature such as the various Unitarians (Other faiths) and many, if not most, of the “religious unaffiliated.” Leaving official denominations and sectarianism aside, at least 80% of America’s population is Christian or so near to be so as to not make a difference.

Like it or not, by both history and statistics, America is a Christian nation. Any claim to contrary is spurious. Non-Christians like myself are statistical outliers in America.

This entry was posted on Tuesday, April 15th, 2014 at 11:53 am and is filed under Politics, Religion, Society. You can skip to the end and leave a response. Pinging is currently not allowed.